During this weekend, together with a few evenings earlier this week, I created a rather simple virtual machine dubbed “Sol”, after the Swedish word for “sun”. I’ve read a lot about VM design and I’m into stuff like OS design, programming languages and other seeminlgy obscure and nerdy stuff surrounding the concept of a computer as a generic tool.

A virtual machine (VM) is a software implementation of a machine (i.e. a computer) that executes programs like a physical machine. — Wikipedia

Sol is a process virtual machine that runs inside an operating system process. However, inside Sol there are multiple tasks (just like most operating systems have processes) and so for a program running in Sol it does not matter what the world looks like on the outside. We could even make Sol boot directly from hardware, but that would just be crazytown. Trust me. I’ve been down that road before.

The purpose of Sol is learning. As we are defining our world, we have an extremely high degree of freedom. One major component of a virtual machine is the provided instruction set. An instruction is the simplest type of operation that a program can perform, and so the set of instructions provided by the virtual machine to programs running in it need to be universal and efficient. 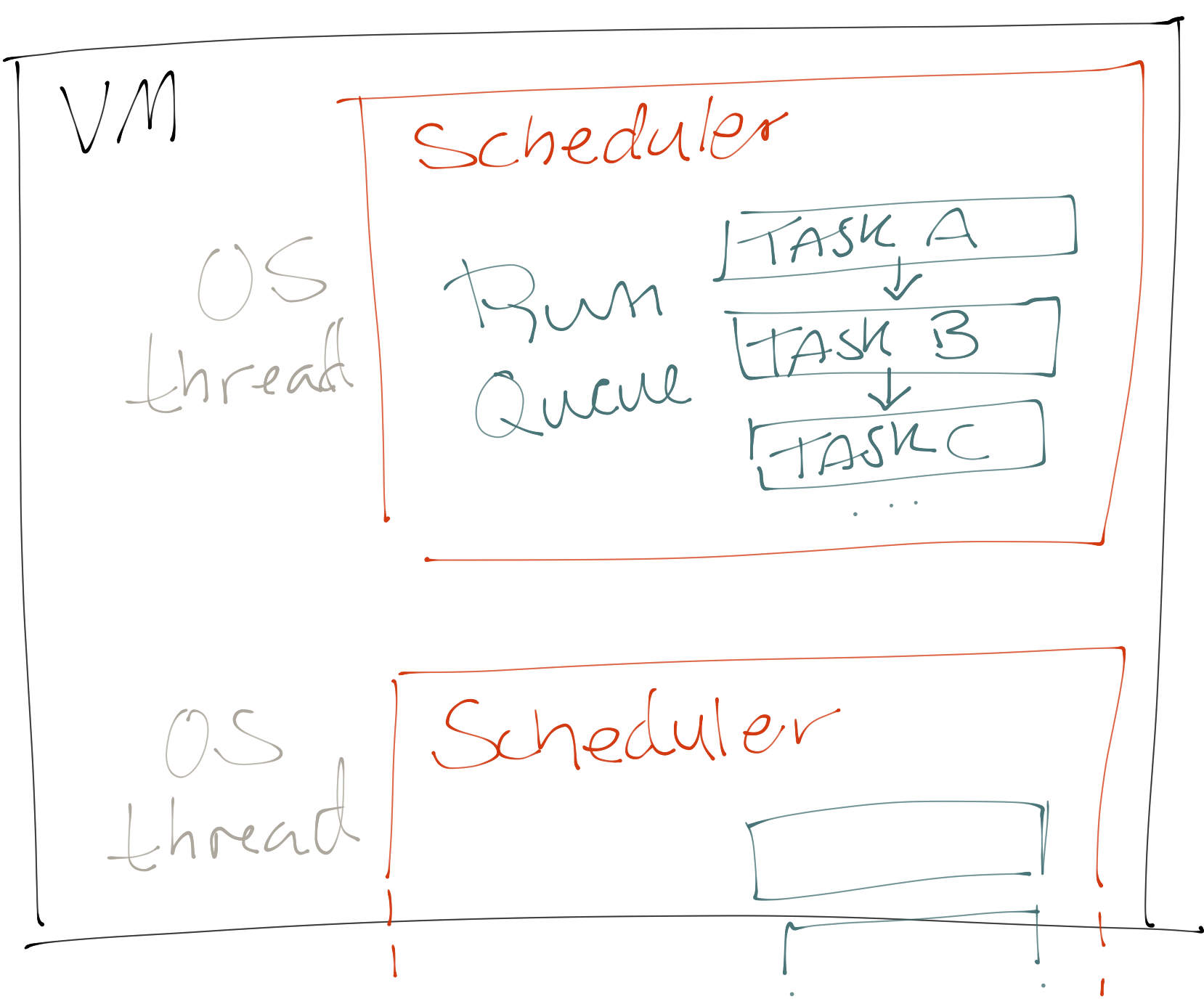 In the Sol VM there are one or more schedulers, each running on one CPU core (not yet implemented at the time of writing this). 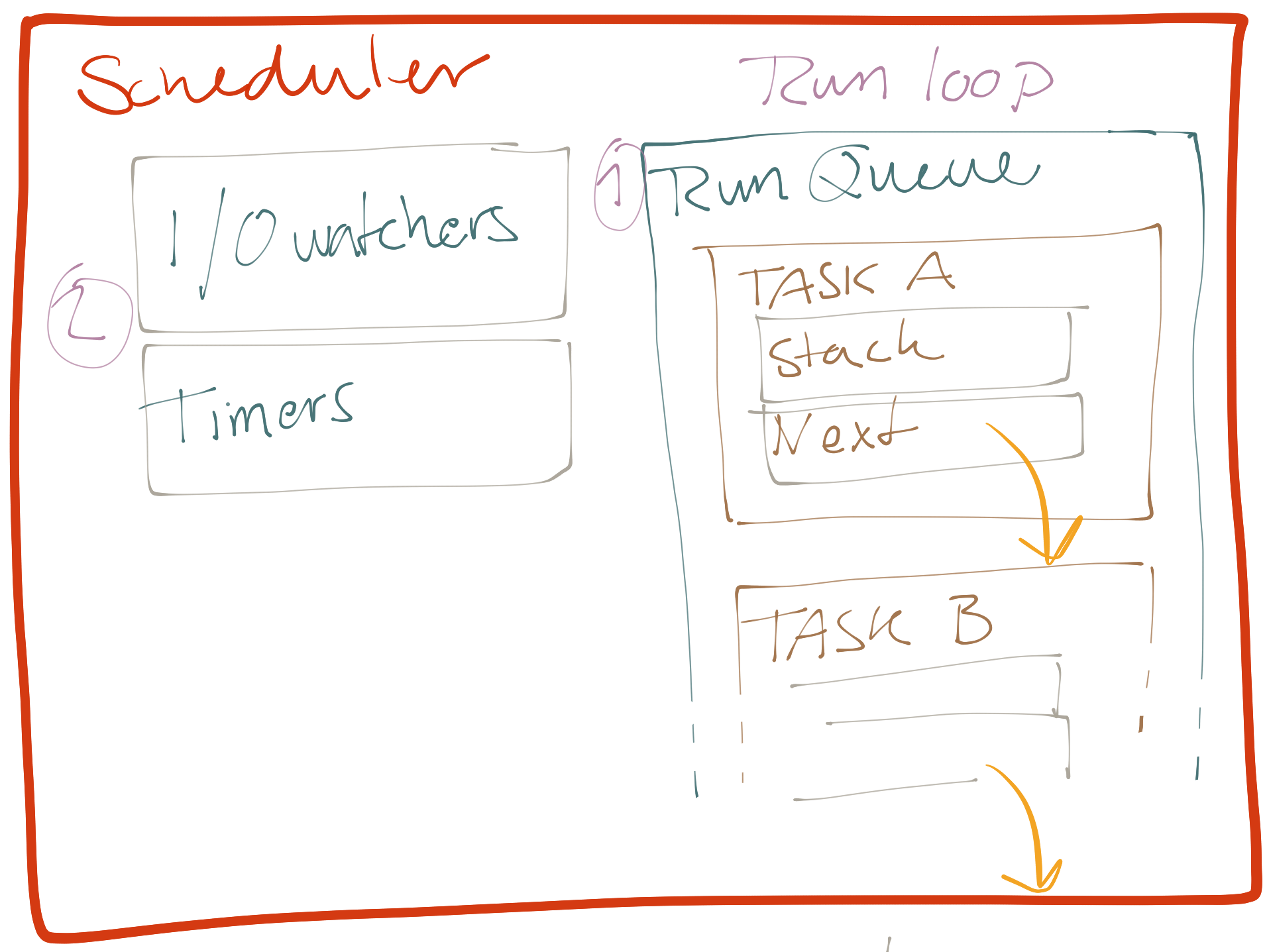 Each scheduler maintains a list of tasks to be run. This list is called the run queue. A scheduler also maintains I/O watchers, timers, handles OS interrupts, etc. The scheduler does most of the work in Sol as it not only does all those fancy things I just described, but it also executes program code.

The run queue is a list of tasks ordered in the way they are scheduled.

Let’s have a look at a task: 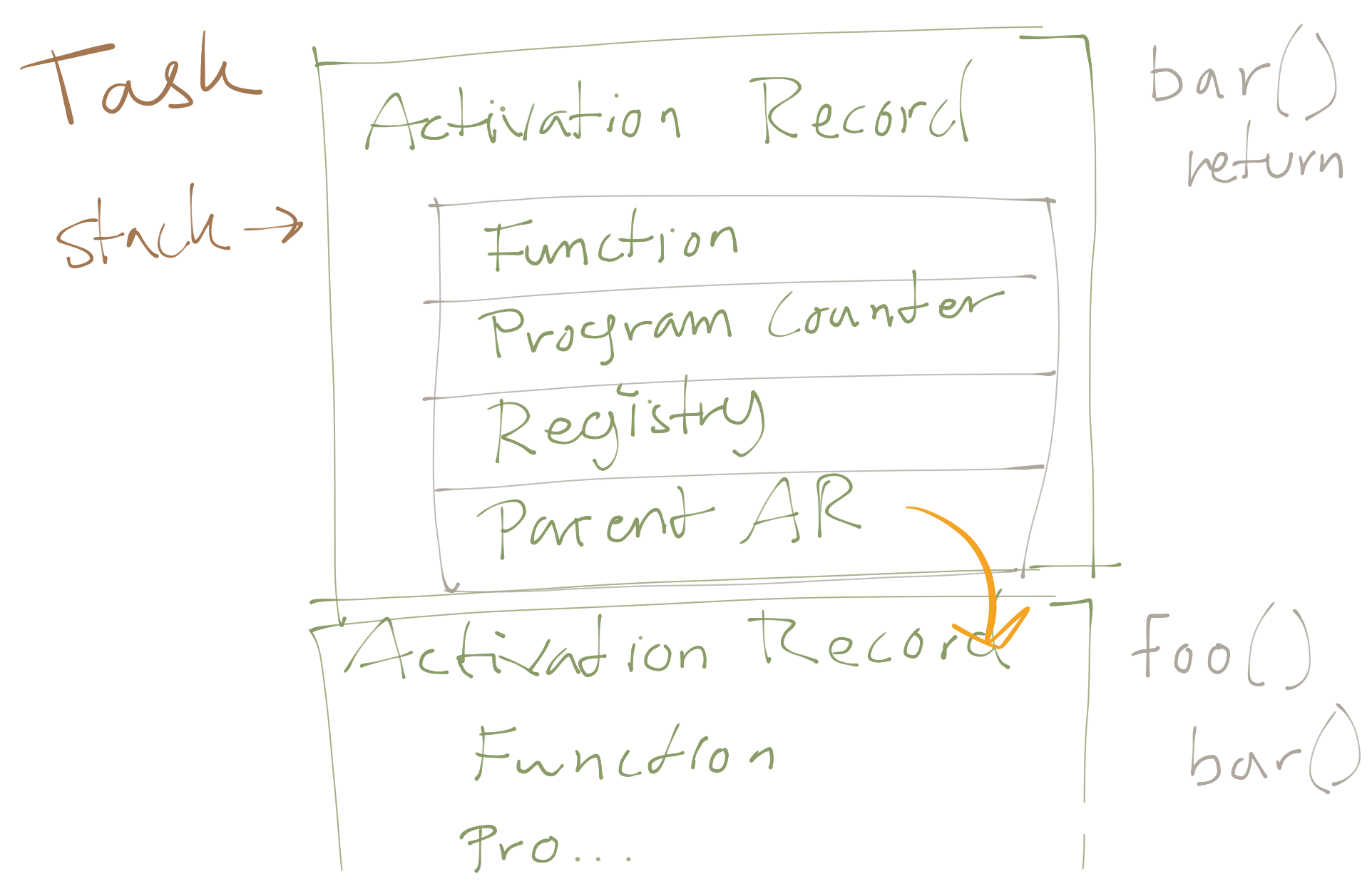 As we can see, a task is mostly an abstraction and contains only one significant component: Activation records. These comprise a task’s call stack and each activation record corresponds to one (active) function call. An activation record contains a reference to the function prototype (more on this in just a second) it’s executing, a program counter (usually called PC) which is a cursor for the currently executing program instruction and finally a registry for values.

The program counter is simply a number that corresponds to an offset into the function prototype’s program (ordered list of instructions). As an activation record (we can think about this as a piece of running code) is executed, the program counter (PC) is incremented as each instruction is executed. Sometimes the PC is decremented, when a program jumps backwards (e.g. when performing a loop). The PC plays a central role in an instruction-based program (like your computer or phone’s hardware which is most likely incrementing a PC right now).

The registry is essentially a region of temporary memory that the executing program can use to store variable data. Imagine this simple function:

Here the program needs a way to store the value created by x * 5 that it can then pass to x * y which also needs to store its resulting value somewhere before using it with return. All local variables are stored in registers and thus access is very efficient. Something like this happens when executing the “foo” function (“R(x)” means “register x”):

In the most excellent paper “The Implementation of Lua 5.0” Roberto, Luiz and Waldemar describes the (not really a) problem with code size and decoding overhead:

Sol takes a lot of inspiration from Lua as well as Erlang.

An instruction consists of one or more components:

As a virtual machine has the disadvantage of being …virtual, we must do whatever we can in terms of assuring good performance, so one of these instructions fit into one machine word. Most hardware today is able to deal with 32-bit long chunks of data very efficiently, so inspired by Lua 5 I chose a 32-bit representation for Sol’s instructions.

Each instruction and its operands is encoded in one of three layouts (Behold, awesome ASCII art!.)

OP ABC — Operation OP with operands A, B and C:

Some operations only need two operands and can be made more efficient if one of those operands is large enough for common values. For this need we define an alternate layout of an instruction:

A third class of operations only use one operand which size has a correlation with efficiency, so we define a third alternate layout of an instruction where the three operands are effectively collapsed into one 26-bit integer value:

A, B, C, Bu and Buu signify unsigned integers whilst Bs and Bss signify signed integers. As we can read above, there’s room for 64 operations and 256 registers (OP=6 bits, A=8 bits) with this configuration. More than we need 🙂

Changing and maintaining instructions (operations + operands) is simple in Sol. I’ve intentionally gone to great lengths in order to make playing around with the instuction set easy. The file instr.h contains a list of instructions:

Sol’s source code is setup in such a way that changing this list is all that is required, apart from the actual implementation of each instruction. Adding or renaming an instruction automatically makes convenience symbols and functions available. Say that we add a DING instruction which plays a little sound every time it’s executed:

Running a program now that includes a DING operation will cause an error in the VM: “unexpected operation”. We haven’t implemented the DING behavior yet! Operations are (at the time of writing this) implemented in sched_exec.h which is the core of the virtual machine as this is what reads and performs the instructions of a Sol program. It can be summed up like this:

Pretty much a good old switch loop. When this C code is compiled with a modern compiler like Clang or GCC, it will be rather efficient as each of our virtual operations effectively corresponds to only a few machine instructions. This is where we need to add DING.

Here the type Sound as well as SoundGet and SoundPlay represents some kind of sound playing function that you provide. Now we can write Sol programs that play music:

No toy VM can be presented without shame unless it’s able to multitask; perform multiple things at once, or at least give the programmer the illusion of concurrency.

Sol has an operation called “yield” which is able to pause a task in any state and later have that task resume at the exact same state. 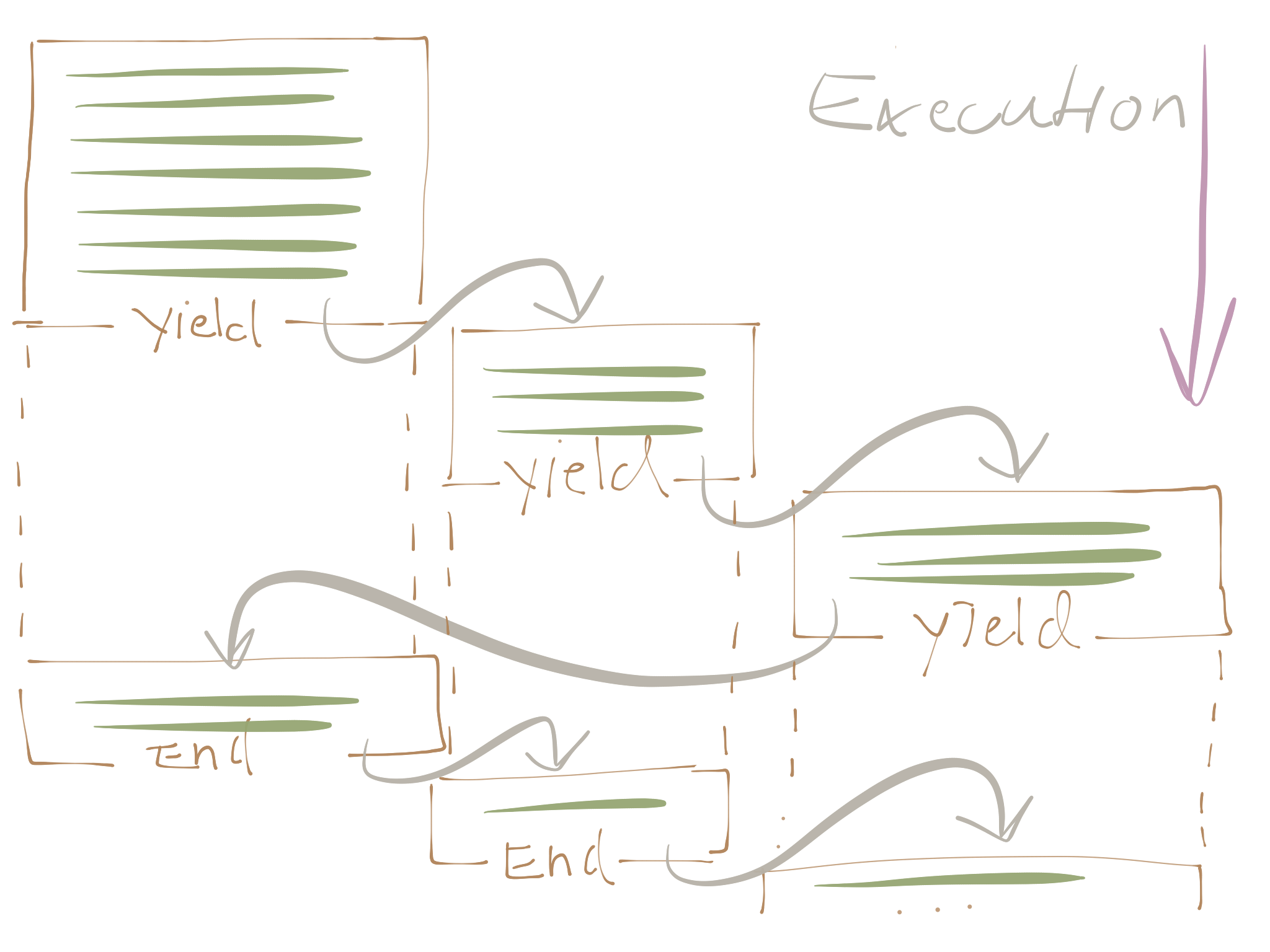 From the task’s perspective it never knew it was paused and resumed. This is a powerful primitive as we can implement many features on top of this. At the time of writing, Sol already has two different types of yield: Yielding for other tasks (so they can run or be scheduled from I/O etc events), and yielding for a timer to expire. At the end of this article there are a few example programs, all of them making use of yield.

Yield is used to implement cooperative multitasking where all tasks cooperate for the use of processing resources. When a task has performed a series of computations and relieves control to another task, one of three things has happened:

Most systems that communicate with its environment and abroad, like a web server or a text editor, spend most of its time (CPU time relative to real time) waiting for the environment to respond; e.g. producing data on a network socket, writing contents to a file or returning a stepper motors position. These systems often benefit from cooperative multitasking, in particular coherent, specialized systems (unlike operating systems which are general by nature).

What Sol provides is essentially coroutines for concurrency. A nice feature with coroutines (aka “green threads” aka “user threads”) is their ability to run sequential code in a concurrent system. A task like this:

Involves three “blocking” calls to the environment which causes the task to yield:

For the programmer it’s easy to follow the flow of her program.

Clearly harder to follow. A task in Sol can spawn new tasks in order to perform several things at the same time, like writing a file while replying over the network.

However, as the Wikipedia section on cooperative multitasking mentions…

Because a cooperatively multitasked system relies on each process regularly giving up time to other processes on the system, one poorly designed program can consume all of the CPU time for itself or cause the whole system to hang.

This can happen when a program performs a very lengthy set of computations and can cause all kinds of problems, especially for other tasks relying on timers. As the Sol scheduler checks for timer expiration only between execution of tasks, a timer might effectively fire long after it was supposed to. Imagine controlling a toy quadrotor where one task needs to update one rotor’s angle each 50 milliseconds, and another task consumes a wholesome 200 milliseconds, then your quadrotor might just crash and burn.

To address this Sol employs an operation cost counter. Each task is given a predefined amount of “operation value” per execution iteration (when the scheduler runs a task’s program). When the operation cost counter reaches its limit, the task is simply forced to yield to other tasks. In the source code, look for S_VM_EXEC_LIMIT.

The code below is expressed in a simplified assembly language that is almost 1:1 with the C API for defining these programs programatically, and so the assembly language itself should be considered irrelevant beyond explaining the instructions executed.

While the variable x is greater than zero, decrement x by one and yield to the
scheduler, letting other tasks run. Eventually return.

Output when running in debug mode:

Output when running in debug mode:

Here we run three tasks, each running the program in Example 1:

Released free under a very permissive MIT-style license at https://github.com/rsms/sol.